Yes really, a dungeon with bars on the window and a giant padlock on the door. Before you phone the NSPCC, let me reassure you that it is in paper form! The summer holidays have really taken their toll and behaviour has slid down into the realms of horrendous, so I came up with the idea of a castle reward chart. There would be paths up and when, (if!!!), they reached the castle, they could have a treat.

I decided to make it with big girl, so she would really feel invested in the project and hopefully take it more seriously. We drew it together and I printed out photos of both children and we dressed them up in costumes, princess for big girl and small boy is a gallant knight. (May be a stereotype but that is what they wanted, I would have happily let them switch if they wished.) He has less steps on his path as he is almost two years younger and she has more opportunities to step forward up her path, with things like having her hair brushed without protest on the list. 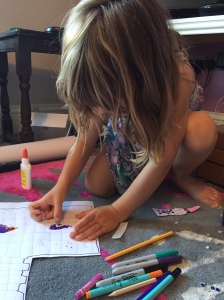 When we had finished, it was pretty late and we just put it straight on the wall, but it was looking a little bit bland. 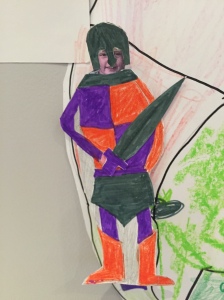 Luckily, the princess and the knight were looking pretty fabulous! Especially with the sequins little miss filched out of my sewing box! 🙂 I’m not convinced about the princess’s lipstick if I’m honest, but she did ask for it. Then complained I’d coloured in her mouth! 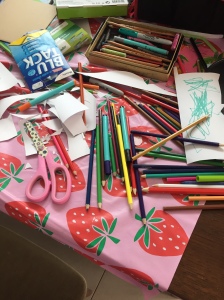 So we got the colours out and had a little fun creating some extra characters and adding in some bright splashes. Oh, and a dungeon….behaviour today was that bad! It is hopefully going to be a good incentive, especially with the (slightly!), scary dragon standing guard!!

We sat down at the table and worked out a list of behaviours that would take them down the path, we have 3 main categories in each, and expanded on them a little bit underneath. When I was writing it out, it was a little jumbled as I had an awful lot of suggestions coming at me that were pretty noisy and interesting so my tenses are all over the shop, but luckily they can’t read yet! You get the general idea though!

They seemed to get the general idea so I’m hoping that they start to improve on things soon! I don’t feel like we’re asking the world from them, just a bit of mutual respect and tidying up after themselves, I don’t think you can ever be too young to learn to behave well.

They are just seeming very spoilt at the moment and I know a lot of that is our fault always doling out the treats! They are going to need to earn them from now on! I think it’s a great act of love to teach them these things as well as to shower them with hugs and kisses and lessen the flow of material goods.

Or that’s the plan anyway!! Anything to stop the cacophony of ‘I wants’ that I seem to be hearing. They get a small treat when they reach the jester and something bigger when they get to the castle drawbridge.

In this case, a trip to a big farm park that I handily already had tickets to. 🙂

2 thoughts on “Today I made my children a dungeon.”

Find your way around